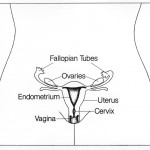 Throughout our journey in bringing menstruation education to young girls we have found that girls (and their parents) can sometimes be very shy about using the correct words for their female reproductive parts.  Even saying the words ‘menstrual period’ can be embarrassing to the girls who would much rather say ‘Aunt Flo’ or ‘being on the rag’.

We thought we would help with this situation by providing a short dictionary of the female parts along with a simple definition.  As a matter of health, girls should be comfortable using these words as it helps if they ever have reproductive issues.  Knowing the proper words can help describe discomfort and leads to better understanding of how the female body works.  The more information that girls have the better control they have over their bodies and their health decisions.

The tubes that allows passage of eggs from the ovaries to the uterus.

Where eggs and female sex hormones are produced.  Generally only one egg is released each month with the ovaries alternating each month on which is producing the egg.

The female body organ where an egg can grow into a baby when a woman is pregnant.

The mucous membrane that lines the uterus.  This lining becomes thick and rich with blood during the menstrual cycle in order to support a fertilized egg.  If a fertilized egg is not implanted than the endometrium is sloughed off during monthly menstruation.

The interior end of the vaginal canal where it joins with the uterus.

The monthly discharge of blood and tissue from the uterus of non-pregnant women.  Generally first menstruation starts between the ages of 9 – 12 and lasts until a woman is in her fifties.