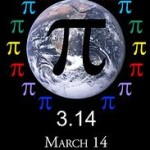 As I was thinking of Pi Day, I took a walk down memory lane and remembered the math contests my 7th grade teacher used to hold every week.  She would put a problem on the blackboard and the class had to work out the answer.  Once you found the answer, you stood up and who ever stood up first was the winner.  She would do several problems so several students would have the chance to come in first.  Being very competitive I always wanted to come in first, and I also always wanted to beat the boys in the class, which I did many times.  Before the start of 8th grade many of the boys transferred from the small Catholic school I attended to the public middle school in town.  This made math competitions far less fun and over time, I lost my interest in math.

This is typical of girls, around middle school girls somehow get the message that math is for boys and they move away from the subject.  But according to an article by Kavita Varma-Whit, a TODAY contributor, girls just need to stick with it, especially in math competitions.  Ms. Varma-Whit quotes a study published in the Journal of Economic Behavior & Organization.  The study found that in math competitions with more than one round, girls performed as well or sometimes better than boys.  Read the whole article here.

What is the lesson here for you as a parent and for your daughter?  The same lesson that can be applied in so many situations – stick to it!  Whether that be a math competition, a sports competition or just sticking to a new habit for more than one day.  Trying once, not being successful, and then stopping can lead to a sense of frustration at never accomplishing anything.  And we all need to know we can be successful at something.