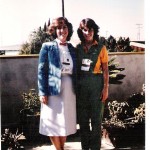 Terri and I in our Olympic uniforms

The London Olympic Games start tonight and I can’t help but remember how much fun Terri and I had while working for the Los Angeles Olympic Organizing Committee during the 1984 Games.

I was just three years out of college and had my dream job as the Payroll Manager for the Olympic full time staff.  During the games Terri worked as a clerk in a downtown hotel.  Even though it was an overwhelming time for both of us (my husband and I were also moving into our first home), it was a blast being part of the Olympic games in one of the best cities in the world.

The 1984 Olympics was also the first time that a women’s marathon was held.  This was noteworthy for obvious reasons.  Through the years women’s sporting events had slowly been gaining parity with men’s events and a women’s Olympic marathon was a huge step in the right direction.  It was also noteworthy because the route went within a block of our new home.  We gathered a large group of family and friends together and walked down to watch the women run past on the main street through our town of Culver City.

The American Joan Benoit was the favorite to win the marathon.  She already held the women’s world record.  I still remember Benoit as she ran past, leading the pack.  The crowd waved American flags and cheered her on.  We were all thrilled to be so close to these Olympic athletes who had worked so hard to be part of the Games.  Benoit went on to win the race and set the first ever women’s Olympic record.

With the 1896 Olympics in Athens, Greece the modern Olympic movement began.  Women were not allowed to participate.  At the 2012 London Olympics every one of the 205 participating countries will send at least one woman athlete to the Olympic Games.  What a wonderful step forward for the women of the world!